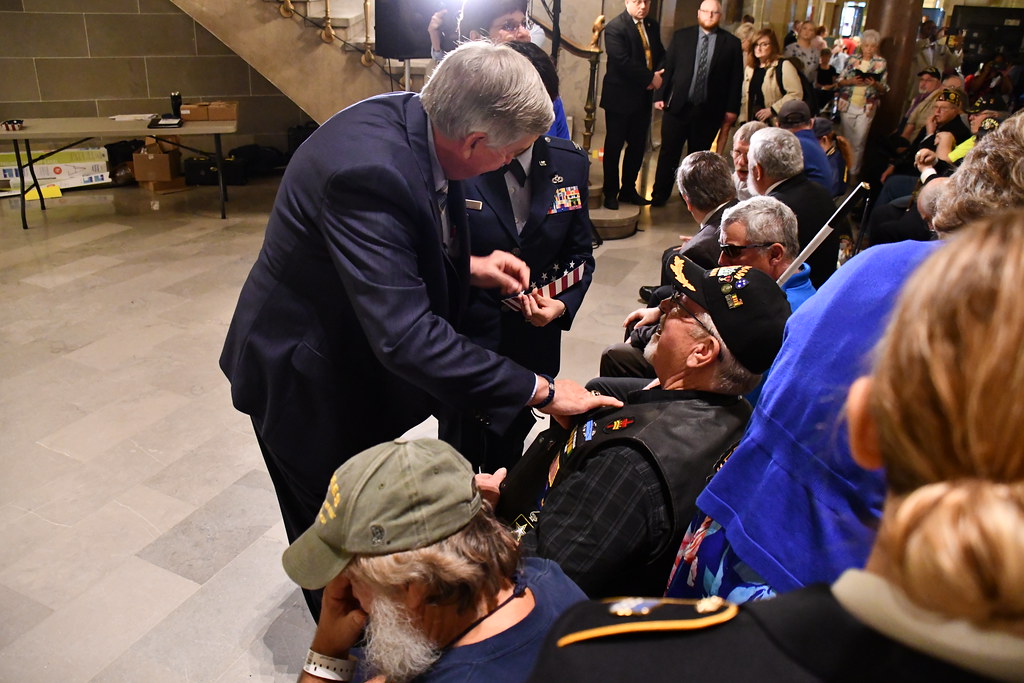 JEFFERSON CITY, Mo. — The eagle represents courage honor and dedicated service. The blue circle signifies vigilance, perseverance, and justice. The laurel wreath is a time honored symbol representing victory, integrity, and strength. The stripes behind the eagle represent the United States flag. The six stars represent the six allies that fought alongside one another.

The message on the back reads, “A Grateful Nation, Thanks and Honors You.”

At a ceremony to thank and honor individuals who served in the country five decades ago, Gov. Mike Parson, Lt. Gov. Mike Kehoe, with other state and elected officials pinned lapel pins on the Vietnam veterans in attendance.

Hundreds of people turned out for the Vietnam War 50th Commemoration Ceremony, with onlookers packing the rotunda.

“The only reason we are all here today, the only reason we can live the American dream…is because of sacrifices people made before you. The sacrifices to this country, to this service, they stood on solid ground for me and you,” said Parson, a veteran himself. “I tell you it is our time, it is mine and your time to stand on solid ground, to do our deed for our country, and to make sure the next generation has the same privileges, the same freedoms that me and you have today.”

It wasn’t about the person wearing the uniform, Parson said, but the sacrifice they made for the country. And receiving their “DD214s” doesn’t end their service either because they never stop fighting to protect the same freedoms and privileges for the next generation.

To view a photograph gallery from the ceremony, visit Gov. Mike Parson’s webpage.