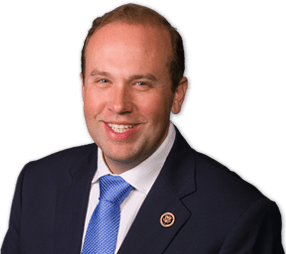 Starting something new can be challenging and intimidating, but when it’s a small business the stakes are high with your entire livelihood on the line. With this Saturday being Small Business Saturday and November being National Entrepreneurship Month, I want to take the opportunity to celebrate these job creators. The entrepreneurs who take the risk to start a business or a farm, armed only with fresh ideas and hard work, drive the economy and embody the best of the American spirit.

When most people think of “small businesses,” they probably think of local mom and pop shops, but small businesses make up 99 percent of businesses in the U.S. They employ half of the country’s workforce and create seven out of ten new jobs in America. In Missouri where our economy is driven by agriculture, 90 percent of farms are small businesses. That’s why it’s vital to have a government that supports business, instead of making it harder to live the American dream. Every time I meet with small business and farm owners across southern Missouri, they tell me what they want the most is the government to interfere as little as possible and let them do what they do best.

That’s why I’ve made it a mission to rein in the unelected bureaucrats in Washington who have never stepped foot on a farm in Missouri or never had to run their own business. Because left unchecked, Washington’s career bureaucrats will pile on burdensome rules for job creators and producers, not realizing that every piece of red tape impacts bottom lines and makes it harder to do business in America.

In President Obama’s last year in office, his administration added roughly 17,000 pages of rules and regulations to the federal register, dragging the economy down by billions of dollars on his way out. Larger firms and farms with teams of attorneys and accountants have an easier time keeping up with the red tape, but small businesses and local farm owners don’t have the time or the resources that Uncle Sam demands. Thankfully we now have a pro-business President in office, and we have repealed over a thousand of the most burdensome regulations. This has saved $23 billion in economic costs in the last year alone and contributed to small businesses being more optimistic about their future than ever before.

But regulations are just one example of how our country was becoming increasingly hostile to job creators before President Trump took office. The U.S. had the highest business tax rate in the world, which punished anyone who wanted to do business in America and encouraged investors and entrepreneurs to take their jobs to other countries. President Trump and I are working hard to change the anti-business culture in Washington so our economy and our country can grow, and last year we took a landmark step with the Tax Cuts and Jobs Act, which I co-authored. We lowered tax rates for small businesses and farms of all sizes, allowed businesses to fully expense internal investments, and rewrote the tax code so fewer family farms are subject to the death tax.

All of this has made the United States open for business and competitive again on the world stage. Since President Trump signed the Tax Cuts and Jobs Act into law, the economy has boomed and hiring has surged. More than two million jobs have been created in the U.S., and for the first time in over two decades there are more jobs in America than people searching for work.

Starting and running a business or a farm is hard work already before the government gets involved, but these entrepreneurs who risk everything to turn their dream into reality truly make America special. I’m proud to work with President Trump to cut red tape and remove the extra weight from Washington, so small business and the American dream can stay healthy and thriving.