COLUMBIA, Mo. – St. James Winery is pleased to announce that Saturday, November 3 its CEO, Dr. Peter Hofherr, was named the 2018 Agricultural Leader of the Year by the Agricultural Leaders of Tomorrow (ALOT). Kristin Perry, Executive Director of ALOT, explains this award is given annually to a non-ALOT alumnus who has contributed greatly to Missouri Agriculture and the ALOT program.  Recipients should be involved in Missouri agriculture via production, agribusiness or academic means. ALOT Board Member, Denny Mertz says, “This year’s winner is unique in that Dr. Hofherr is involved in all three areas of Missouri agriculture- production, agribusiness and academic.”

Hofherr is a native Missourian with a doctorate in agriculture and applied economics from the University of Missouri. He has served as the Deputy Director and Director of the Missouri Department of Agriculture, Chairman of the Missouri Wine and Grape Board, President of the Missouri Agriculture Foundation, and on the boards of Wine America, the National Wine and Grape Initiative and the Missouri Statue University Board of Governors. In addition to these and many other positions, he is the second-generation owner of St. James Winery. Under his leadership, this family business became Missouri’s largest and most-awarded winery. Hofherr and his team of professionals are actively involved in using the latest technology to draw the very best out of the land and produce quality products that show off the region. “We are always excited to share products that reflect the land and lifestyle we love,” says Hofherr.

The ALOT organization started in 1983 and provides advanced leadership experience with the intent of making a positive impact on agribusiness in the State of Missouri. The organization’s approach to developing leaders has resulted in a strong alumni network and a powerful group of over 500 Missouri agricultural leaders including six Directors of Agriculture, and 15 Missouri legislators. 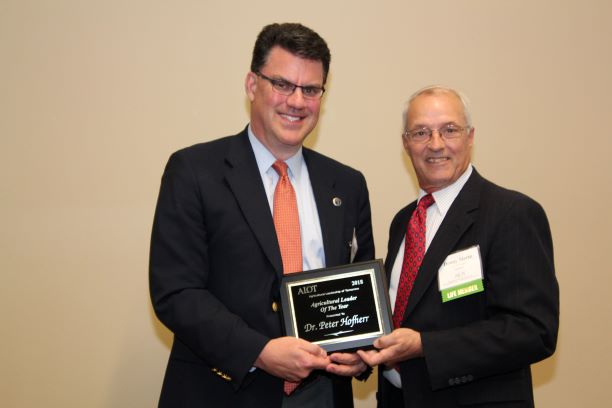 Founded by the Hofherr family in the Meramec Highlands region of Missouri in 1970, St. James Winery is celebrating 48 years as a family owned and operated winery. Located in St. James, MO, it is Missouri’s largest and most awarded winery. In the last four years, it has won numerous contests in the U.S., including two consecutive Missouri Governor’s Cups, plus seven international wine contests. St. James Winery produces 500,000 gallons (225,000 cases) of wine per year and is sold in 16 states and Washington D.C. For more information, visit StJamesWinery.com or connect with us on Facebook, Twitter or Instagram.