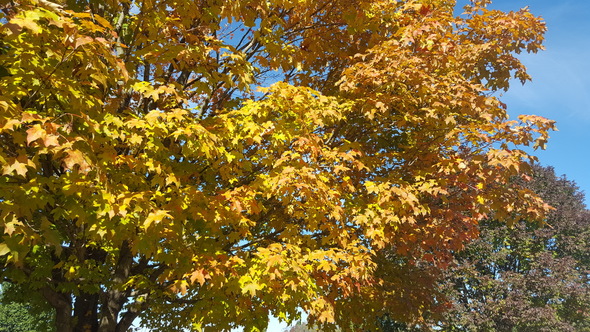 Some yellow hues appeared early while many trees are still green.

CAPE GIRARDEAU, Mo. – Autumn color is still at a crawl this week, despite the cooler temperatures, according to Jennifer Behnken, a Missouri Department of Conservation (MDC) community forester. Autumn color in southeast Missouri is highly affected by the variable weather, which has changed swiftly from hot to cold, she said.

Sometimes trees turn their fall leaves into yellow, red, and purple foliage in a steady progression from late September through October. Peak colors often appear in the third or fourth week of October. But this year, color change has been erratic. Not unlike recent weeks where October started in the region with temperatures in the 90s, then dropped into nighttime lows in the low 30s by Oct. 15.

“Fall colors may be quick in turning this season, here one week and gone the next,” Behnken said. “Stay on the lookout for this change as it happens in the next few weeks.”

Areas of the region all differ, she said. There may be true transformations in the north, while little color may be seen in the southern portion of the region. Meanwhile, dogwoods and sumacs are still going strong with flashy scarlet and purple hues.

“A few persimmon trees here and there are showing violet undertones and black cherry trees are displaying yellows, as well as sycamores,” Behnken said. “A few red oaks, such as Shumard oak, black oak, and pin oak, are showing tans but they still have more color to show.”

Behnken said the current Autumn color performance is due to the region’s good amount of rain this year, but the temperatures were warmer than usual for longer. That phenomenon has delayed fall color progress.  The quickly changing temperatures will likely cause a rapid turnaround in fall colors; they will most likely change quickly and then be gone.