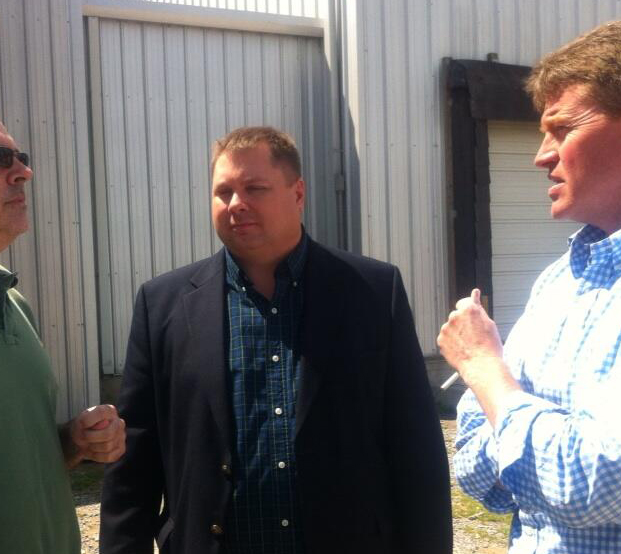 When President Trump canceled a recent visit to Southeast Missouri he missed a golden opportunity to see up close and personal the devastation his trade war is having on Missouri farmers. Of course, that wasn’t his reason for visiting. He was raising money for U.S. Senate candidate Josh Hawley and trying to distract farming communities like ours by making tall promises of a wall and attacking immigrants to obscure the real issues facing working Missourians. As farmers nervously prepare for harvest, we want real solutions. Yet when we turn on the tv what we mostly see are attack ads put out in support of Hawley focusing on an anti-immigrant agenda and other Washington D.C. fear-mongering rhetoric.

Missouri soybean farmers produce a crop that drives our state economy. Soybeans are responsible for $3.2 billion in value, 20,700 jobs, and $1.4 billion in labor income. Unfortunately, high tariffs, labor shortages exacerbated by President Trump’s indiscriminate immigration enforcement, and falling prices are an ever-present threat to daily life and the economic security of both my family and my workers.

Trump’s tariff war with China is the single largest threat to our livelihood, yet politicians like Josh Hawley aren’t interested in real solutions, so they turn their attention to issues like immigration. For over two decades, our government has had countless opportunities to pass bipartisan immigration reform, overwhelmingly demanded by farmers and small and big businesses. But instead of passing reform, certain politicians would like to use the issue as a way to play partisan games and divide communities.

Today, extreme enforcement policies have made it difficult for us to recruit workers who are crucial to our farms. Agriculture employs 400,000 individuals across Missouri, and over 141,797 of them are immigrants. With labor shortages at a near crisis level, we can’t afford to lose the immigrant workers we need.

And along with labor shortages, we are also faced with falling prices. President Trump promised to fight for farmers, and instead his reckless trade policies are undermining our agriculture economy. Right before President Trump’s tariffs hit, the price of soybeans was $10.19 per bushel. Sadly, soybeans have now dropped all the way down to $7.75 per bushel.

These price changes have devastating consequences for Missouri. For every ten-cent drop in soybean prices, our state loses more than $36 million in economic activity, $21 million in tax dollars, and 3,000 jobs.

For so long, Missouri has been my home and soybean farming has been important in my life – allowing me to support myself and my family. But now President Trump’s failure to focus on the issues that matter, while engaging in useless finger pointing and fear-mongering, is threatening to upend the life I’ve built in this great state.

The fact of the matter is, our families, our livelihoods, and our futures are at stake. We don’t need distractions. We need solutions from leaders who are ready to support us and invest in our local economies. That’s what President Trump missed hearing in Southeast Missouri this week.

Barry Aycock was born and raised in Parma, Missouri. He currently farms and is vertically integrated in six different agribusinesses.