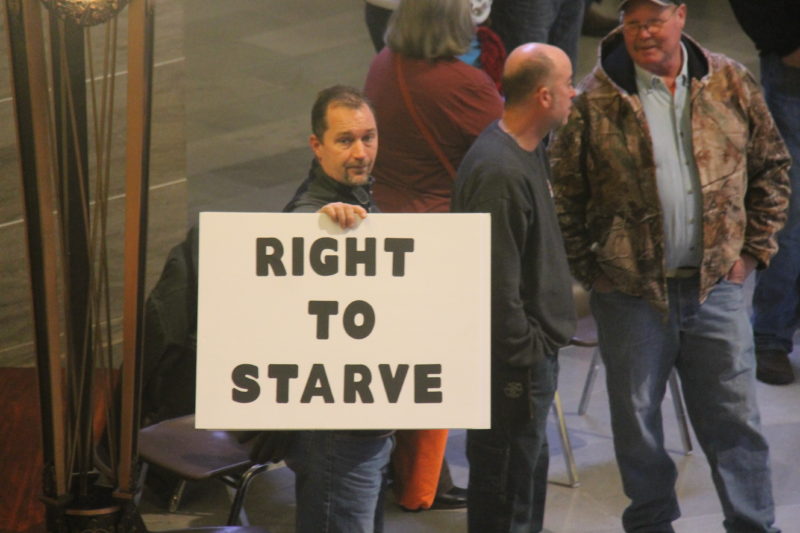 JEFFERSON CITY, Mo. — Through the deduction of unions, wages in right-to-work states decrease, a new report from the Economic Policy Institute found. The report also found the RTW laws do not increase job opportunities nor boost the economy.

Janelle Jones and Heidi Shierholz from the Economic Policy Institute authored the report which focused on how RTW could impact Missouri by evaluating data from RTW and comparing that to data from non-RTW states.

Then-Gov. Eric Greitens signed RTW into law, a concept he campaigned on, in February 2017. Labor unions and their supporters subsequently gathered the needed to signatures to put the issue to a statewide vote in 2018. In fact, they gathered nearly three times the number of needed signatures.

In less than a month, Missourians will take to the polls to decide whether or not to become a RTW state. The measure is on the August 7 ballot along with the primary election.

Proponents say that RTW will lead to more jobs, higher pay, and that it will attract more companies to the State of Missouri.

The report released on Tuesday casts some doubt on the claims made by supporters on the law.

“The evidence is clear that these laws do not boost employment, they simply kneecap unions and hurt workers’ wages,” said Jones, an economic analyst at EPI. “Missourians should consider the negative impact these laws have had on wages and job quality in other states—and ignore false claims that they would boost the economy or attract new businesses.”

Proponents of RTW argue the law ensures no one is forced to be a member of a union or pay to advocate political causes they do not support. RTW laws do make it illegal for unions to require “fair share fees” — fees charged to nonunion members for benefits they receive from the union, such as contract negotiation.

Under federal law, unions are required to represent every employee covered by a union contract, even nonmembers. Nonmembers in a collective bargaining unit get all the benefits of collective bargaining agreements and if a non-dues-paying employee has a problem at work, the union is required to represent them — including providing an attorney at no charge if one is needed — in exactly the same way it would represent a dues-paying member.

According to the report, “unions in RTW states are the only organizations in the country that are forced to provide all benefits for free to people who opt not to pay for them” which leads to a decline in union participation and thus unions.

Granted, there is a national trend away from unions in general, acknowledged Shierholz, EPI’s Policy Director. But she said, that in non-RTW states, a decrease in union participation was less served and only resulted in stagnant wages.

Nationally, 5.2 percent of private-sector workers in RTW states are union members or are covered by a union contract, compared with 10.2 percent in non-RTW states. Following Oklahoma’s passage and implementation of RTW, union participation decreased by 30.6 percent.

Jones and Shierholz estimate that nearly 60,000 fewer Missourians would be covered by a union contract if RTW is implemented in the state.

It is through the decline in unions that wages in RTW states decline, the report claims. RTW has an indirect effect on lowered compensation — it is not a direct link.

“Unions don’t just raise wages and strengthen benefits for their members, they set a high standard that all employers seek to meet,” said Shierholz. “So it’s no surprise that workers in RTW states make less than their peers. After accounting for a state’s cost of living and workers’ education and background, workers in RTW states earn 3.1 percent less than their non-RTW peers.”

The report also found that RTW has no effect on jobs or employment.

In 2017, both the highest labor force participation rate in the country — in North Dakota — and the lowest — in West Virginia — were in states with RTW laws. Missouri has the same unemployment rate as its neighbors with RTW laws.