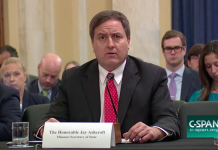 WASHINGTON, D.C. — During a hearing on election security preparedness nationwide, part of the conversation diverged on a path of voter fraud following a statement by Missouri’s Secretary of State.

“The evidence indicates that voter fraud is an exponentially greater threat than hacking of election equipment,” said SOS Jay Ashcroft.

A few senators on the U.S. Senate Rules and Administration Committee took issue with the statement and pressed Ashcroft to site any study, nonpartisan report, or facts of any kind that backup the statement.

Ashcroft pointed to Missouri’s own history with voting irregularities potentially affecting the outcome of an election.

In 2016, a judge ordered the redo of Missouri’s 78th House District election because of absentee ballots that were alleged to be cast inappropriately. While incumbent Penny Hubbard originally came out ahead by 90 votes, she lost the redo election by more than 1,500 votes to Bruce Franks, Jr.

A dog was registered to vote in Missouri’s 2000 election and actually cast a ballot, according Ashcroft.

While the U.S. Senators questioning Ashcroft recognized the voter fraud happened, they questioned how it was “an exponentially greater” threat than hacking.

“Let me tell you want happened in Illinois, because we were one of the 21 states hacked by the Russians,” said U.S. Senator Richard Durbin, D-Illinois. “They got into our voter file, someone left a little worm hole in there and they got into our voter file. They had the capacity — and thank goodness they didn’t use it — to change just a digit on each of our addresses and make a chaotic situation at the polling place…I don’t know how that would have ended.

“The threat was there where I can count on my hand the number of cases of voter fraud…and the convictions even fewer.”

Ashcroft pointed out that there is no evidence that a single vote or voter registration was improperly altered during the 2016 election cycle.

“It was not our votes that were hacked, it was the perception that was hacked,” testified Ashcroft.

“Consequently, moving forward, any meaningful enhancement to election security must take a comprehensive approach to ensure that every legally registered voter is allowed to vote and that their vote is not diluted by any sort of voter fraud, malfeasance, or ineptitude.”