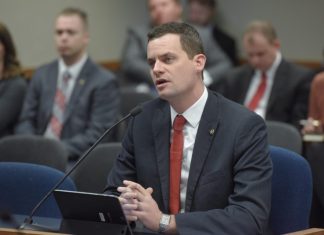 The Republican on Monday morning resigned from his seat to immediately begin working for the new governor, Mike Parson.

Alferman will serve as legislative director for Parson, where his role will be to help build, promote, and progress Parson’s legislative priorities, working with members of both legislative chambers to pass them into law. He will also serve as the manager of a team of legislative liaisons to push those priorities.

As for his now-vacant seat in District 61, filing will be reopened to allow for potential candidates to run in the August 7th primary.

I want to congratulate my buddy and former once future budget chairman @Justinalf on his new position with @mikeparson. It’s a great hire by the governor, and I’ll miss having him as my vice-chairman on @MOHouseBudget committee. #moleg