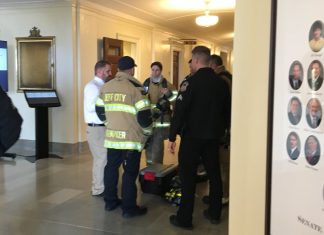 JEFFERSON CITY, MO. — The Missouri Senate is back in session after being on lockdown Thursday morning, with members of the Jefferson City Police Department arriving on scene due to what has been described as a “suspicious package.”

According to a statement from the Missouri Senate leadership, an unknown substance was delivered in an envelope to a senator’s office on Wednesday, April 18.

“The envelope with the substance then came in contact with several staff members, and authorities were promptly called to investigate the issue,” the statement from Senate President Pro Tem Ron Richard and Senate Majority Leader Mike Kehoe read. “At this moment, law enforcement believes the substance poses no threat to the public. However, authorities are taking extreme caution with the situation and are working to ensure the State Capitol remains safe for all visitors.”

The substance, described as green and powder-like in nature, was sent to Sen. Maria Chappelle-Nadal. She told the Senate on Thursday that it had arrived in the Senate mail room through the U.S. Postal Service, but did not have a return address.

Chappelle-Nadal said the first thought that she had after being informed was about the children that could have been exposed.

“There is a policy that we have to have in place to ensure that our visitors are OK,” she said. “We want to make sure that those innocent folks are safe, and that’s the number one concern that I have.”

However, preliminary tests say everything is ok and that the substance was not harmful.

“We wish to thank local first responders and members of law enforcement for their quick reaction to the issue. Early analysis indicates the substance is not harmful and does not present a threat to anyone in the building; however, we are extremely thankful that they continue to monitor the situation in order to guarantee our protection and safety,” Richard and Kehoe’s statement read.

The substance has since been removed from the Capitol, and the three offices (the mail room, Sen. Chappelle-Nadal’s office, and the Senate administrator’s office) will be closed until further tests are completed.