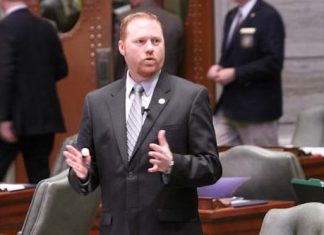 A resolution filed in the Senate is seeking to modify the term limits that were put in effect after the passage of the Missouri State Congressional Term Limits Amendment, also known as Amendment 12, on the November 1992 ballot.

SJR 28, filed this session by Sen. Jason Holsman, would place a constitutional amendment on the ballot, letting voters decide whether to change the state’s term limit laws to allow members to serve all 16 years in one chamber, instead of the current law which limits them to eight years in the House and eight years in the Senate.

At issue is the effectiveness of the term limits. The law’s intent is to keep legislators from accumulating too much power, while also allowing new members and new ideas to flow into the Legislature.

But on the other side, inexperienced legislators have less knowledge of the issues, with many inside the Capitol lamenting the loss of institutional knowledge with outgoing legislators.

Holsman said that the resolution would allow voters to make the decision, to decide whether term limits as they are have been effective.

“What we’re trying to do is let the voters re-evaluate a decision made 20 years ago. We’re not trying to undo them, we’re just trying to give a member the chance to serve their entire time in one chamber,” he said.

Holsman compared the state to a $27 billion company that replaces their CFO and CEO every two years, asking his colleagues how that was a solid business plan, knowing that the legislative leaders were routinely limited to two-year terms upon arriving in the offices.

But his legislation also included a complete lobbyist gift ban for all 197 members of the Legislature, their staff, and family. The combination of the two ideas into one piece of legislation did not seem to sit well with some members, however.

Sen. Bob Onder did not favor changing term limits but said he was in favor of a gift ban.

“If we could vote to divide the question and have the opportunity to vote separately on (these issues), that would be good,” he said. “I favor a lobbyist gift ban, but I also support term limits.”

Onder called the legislation a Trojan horse, using the lobbyist gift ban to further the modifying of term limits.

“It’s confusing when we pair two issues together like this,” he said.

Sen. Rob Schaaf agreed, noting that dividing the question can only be done in the Senate with an amendment, not with the actual meat of the legislation. He said that the two issues were a “pornography and motherhood and apple pie” problem, that it would put some senators in a position in which they would vote for motherhood and apple pie, and then open themselves to the charge that they had voted in favor of pornography.

But the thing that stuck in the craw of several senators was the provision that addressed some concerns of potential lawsuits under the Equal Protection Clause of the 14th Amendment. They argued that the resolution would allow some current legislators to serve up to 32 years.

“How would you all like to have me back in the Senate for 16 more years?” Schaaf said, with Lt. Gov. Mike Parson quickly using the gavel to restore order as senators laughed.

“I was out-of-order for even saying that,” Schaaf quipped.

The Senate turned to Sen. Scott Sifton for legal expertise, as he is one of the two attorneys by profession in the body.

“Your SJR allows voters to decide,” Sifton agreed with Holsman. “Someone is going to sue, and the SJR may get tossed out on a technicality, and we don’t want that. Your SJR is drafted in such a way to avoid that.”

As Sen. Onder said, he didn’t believe that a lawsuit alleging a violation of Equal Protections Clause would “pass the snicker test.”

But another concern was that the complete gift ban in the original language did not include lobbyist principals. Schaaf put forward an amendment that added them to the resolution’s intended ban, which passed with a voice vote.

“I think it’s good to have a turnover in leadership, to have new ideas and new people,” he said. “I think that’s one reason that brought term limits in the first place.”

But at 6:30 p.m., with a little less than two hours of debate, Holsman rose and asked that the bill is laid over, with Koenig’s amendment still pending.