The judge presiding over Governor Eric Greitens’ case regarding alleged invasion of privacy denied the Greitens’ defense team’s request to trial by judge.

Circuit Judge Rex Burlison decided the case will go back to its original scheduling and to have it heard by a jury trial on May 14. 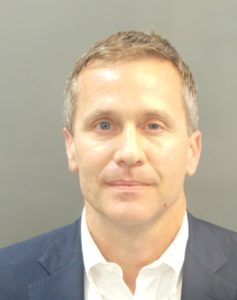 Additionally on Monday, Greitens’ lawyers wanted a complete dismissal of the trial because they felt that First Assistant Robert Steele misled the grand jury about the state’s invasion of privacy law.

Greitens’ lawyers also said that Steele what Greitens did with the alleged photograph was irrelevant and the only issue is if he took the picture without her knowledge and if she was nude.

Also discussed at the hearing was the defense team’s issue with Circuit Attorney Kim Gardner hiring Harvard Prof. Ronald S. Sullivan as a special prosecutor. Sullivan was brought into the team early in March.

The defense team’s motion claims that the hiring of Sullivan violates a Missouri law that blocks private attorneys from assisting elected prosecutors. The motion also notes that Sullivan represents parties other than the state of Missouri as a defense attorney which violates state statutes.

Burlison said he would make a decision regarding the motions “shortly”.

Towards the end of the hearing, the judge heard from Mark Sableman, a lawyer for various outlets, regarding the use of television cameras during the trial which is set for May 14. Burlison said a decision would be made if Sableman discussed the issue with prosecutors and defense team, and see if they would consent to the use of the cameras.